One of the delights of researching the Gosford Glyphs is running into the odd ( and I mean odd ) psuedo archaeologist / theorist / nutter along the way , they can range from the UFO believing space cadets , to crystal bearing new age enlightened ones ( usually women ) or modern day self styled Indiana Jones type fellas.
I first heard of this Von Senff person while poking about researching the glyphs story and later on after I published an article on my blog he left some funny comments typical of some of the rubbish that people leave on that page.
Now 83 year old Hans is not an Egyptologist , far from it , he lists it as a hobby.
The challenge has always been to Hans to provide some solid reliable scientific proof that the Egyptians carved the glyphs at Kariong , something to this date he has failed to do.
Now I'm talking signed letters from the big wigs here , you know the Museum of Antiquities in Cairo for a start , and all the museums in fact ( any ) something legitimate from real Egyptologists.
Not pages and pages of why he thinks the carvings are real and what they mean , this means nothing if no one will agree with you - and no one has to date.
Hans has produced tomes of fantasy titled " Forbidden Archaeology " and also " Egyptians in Australia which have gone largely ignored by professionals and ridiculed by anyone who actually sat down and waded through page after page of dubious speculations.
Hans has pestered various people from the Minister for Environment for NSW , NPWS , British Museum and god knows who else in his quest to no avail , I would love to see some of the replies he gets and of course he would never publish them anyway.

A recent discussion thread at the Unexplained Mysteries forum was a lesson for Hans not to go spouting off in public with ridiculous claims without being able to back yourself up.
One of the totally mind numbing claims by Hans is that I wrote the book , The Encyclopedia of Dubious Archaeology or at least the entry on the Gosford Glyphs on page 119 , a claim that despite being shown many times to be false , he persists with.

Truth is however, that Steve Spillard, aka. Woy Woy Steve declared on a website "Unexplained Mysteries", that he never wrote the article in the " Encyclopaedia of dubious Archaeology"p. 119-122, which I do not believe, because I have yet to see a writer, who writes under a bogus name (not a pseudonym) and assumes the character of Steven Spillard. I have yet to see an earlier claim as to: "Why he suddenly disclaimed his authorship to the fabricated fiction, that the Kariong Glyphs are a Hoax, as Spillard claimed in his Article." Now he claims, that it was never written by him, but some unknown person, to whom he sent the information.


The whole book was in fact written by Kenneth L Feder and he contacted me a while back asking for permission to use some photos I had online of the glyphs , I of course obliged.

I'm an archaeologist here in the US working on a one-volume encyclopedia
tentatively titled "Encyclopedia of Speculative Archaeology" which deals
with a host of archaeological fakery. I am including an entry on the
so-called Gosford Glyphs. I am writing to request permission to use one of
the photographs of the glyphs that appeared on your website
(http://home.iprimus.com.au/blazelands/woywoy/carvings.htm). (It's the image
at the bottom of the page, a close up of the glyphs).

Thanks for considering my request.

I think poor old Hans got confused when he seen my name under the photo that they used , it only means the photo is mine , something most publishers do. 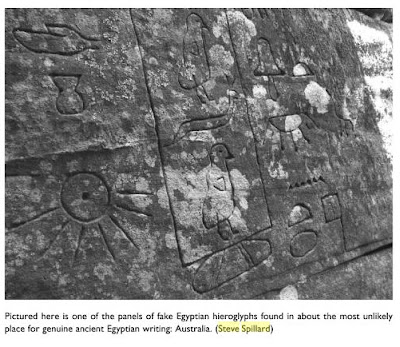 ( Photo from page 120 The Encyclopedia of Dubious Archaeology by K. Feder )

Now silly old Hans has gone around the web quoting Ken Feders words as mine which is quite amusing and he goes to great lengths trying to disprove me in his recent pile of garbage " Egyptians in Australia " a 140 page paper he has conjured up on the glyphs story - what a sad and totally pointless waste of time and I wonder if he is mentally ill or just an elaborate hoaxer himself , surely anyone with enough intelligence to attain a PHD would be able to tell quite quickly that I am not the author.

Hans also thinks that I am the only person to call the glyphs story a hoax and that if he can shout me down on as many obscure internet forums as he can log into that I will go away but unfortunately that's where most people end up after not swallowing Hans pile of old cock and they do a little Google search on the glyphs and end up on my web pages !
Fact ,  I am not the first person to report the glyphs as a hoax , there are plenty of web pages doing that and some of them for a lot longer than mine.
I am not the first person to de bunk the glyphs mystery using a little research , people did that long ago as well , all I have done is collate a lot of websites into one readable account.
What I did do though is publish the first local account of the glyphs story using some background research on the history of the site , I also visited Gosford Library and viewed the files they hold on the glyphs including letters from Ray Johnson.
I was also the first person to contact the surveyor who first noted the glyphs in 1975 , Alan Dash and published details of that conversation.

I am not the first person to discovers holes in Hans theories , he was virtually torn to pieces on the Unexplained Mysteries forum and took off with his tail between his legs only to post more ravings on a little used forum just recently.

But you must agree from a logical stand point for us to agree with you, you would need to produce some pretty good hard evidence to support your case, as from what I have read posted by Steve, it would appear not only has your research been out gunned but its been undone and out matched, now Im not saying you have not put the hard yards as I call it into your research Im saying is lacking a certain aspect of proof.


One of the members from UM has put together a very informative look at the glyphs debacle and examines some of Hans' claims in detail , he has a bit more knowledge of Egyptology than myself and it was good to see another unbiased overview of the story , in fact this is the best review on the web to date.

For my articles on the Gosford Glyphs please look on the sidebar menu on the left and beware of old German nutters trolling internet forums ;)