1. The Ettalong Water slide
Most people know about the water slide opposite Ettalong War Memorial Club in the late 80's but do you know where it is now? 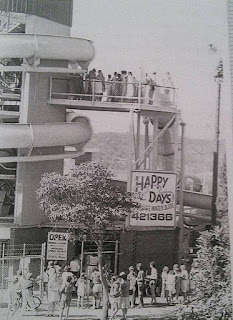 The tower section was sold to be converted to a climbing tower to a company in Queensland and the slide sections were given to a youth refuge at Somersby where it was installed next to a dam, from reports the ride was quite deadly and claimed a few victims so it was placed out of bounds , you can see the Google image below 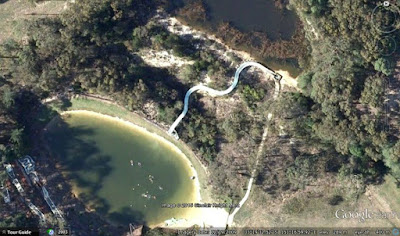 2. Patonga Station
While researching I uncovered this article about the first proposed route for the nothern railway between Brooklyn and Woy Woy

The following extract is from the New South Wales Legislative Assembly, 1 December 1881, Answers to Questions, as reported by The Sydney Morning Herald, in relation to connecting the Great Southern and Northern Lines via the construction of the Homebush-Waratah Line:
...From this point the line takes a north-easterly direction towards Flat Rock Point, crosses the channel between the southern mainland and Long Island; thence across the Hawkesbury River to Dangar Island (37 miles [60 km] from Redfern); and thence across the main channel of the river to a tunnel through the cliffs on the northern bank to Patonga Creek; thence by a tunnel through the high land between that creek and Woy Woy Creek, thence across that creek and skirting the western shore of Brisbane Water, across Narrara Creek through to the village of Gosford (49 miles [79 km])...[
This original route and tunnel location was not adopted ( see diagram ) 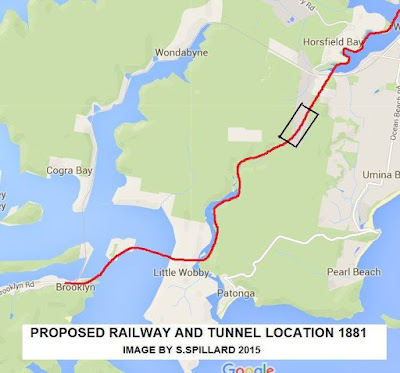 3. The plot to blow up Woy Woy Tunnel
During WW2 with the threat of Japanese invasion quite real , a national defense plan was set into action
Part of this plan was to disable the railway system so the Japanese could not use it if they invaded along the coast.
The Americans were in charge of coastal defenses in 1942 and trialled demolishing railway tunnels with explosives at an old tunnel near Otford on the South Coast.
Explosives were lowered down an air shaft and detonated , successfully collapsing the tunnel roof , it was proposed to repeat this plan at several other tunnels along the coast including Woy Woy tunnel.
Small tunnels about 6 foot high and 30 feet long were dug above the main entrances to the tunnels , explosives would be placed at the end of each tunnel and the following explosion would collapse the main tunnel mouth rendering it useless.
The tunnel could be repaired later by this method , the trial at Otford collapsed the middle of the tunnel making it extremely hard to repair afterwards.

The demolition tunnels were dug by Railway workers and the Army was billed for this work in 1943.
2,400 pounds of A.N 60 Gelignite was stored in a magazine nearby to be used for the demolition of Woy Woy tunnel in 1942 , as the war in the Pacific turned the plan was abandoned and the tunnels were fitted with strong wooden doors and padlocked.
The small shaft is still intact directly above the tunnel portal today. 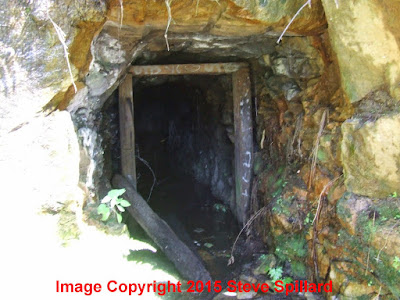 Posted by Steve at 2:42 AM No comments: Links to this post