It seems the Kariong fringe theory brigade are getting a tad pissed off at my debunking work , nearly everyone who sets out to debunk these dreamers end up using parts of my research and invariably I cop the flak via comments on my various pages.
Which I don't mind because I can deal with the most persistant of internet trolls and freakos and have been doing so since the old Yahoo chat and bomb days. 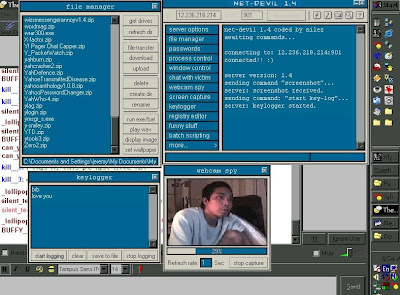 It seems years ago that I was involved in a 24/7 chat room community that spanned worldwide , we ended up ( out of need for self protection ) becoming hackers and scammers , waged years long cyber wars with all sorts of nasty programs that killed computers and generally had a great time , met tons of people who became real life friends and got myself laid a whole lotta times to boot.
So a few pithy comments on my forums / blogs etc doesn't ruffle me at all. 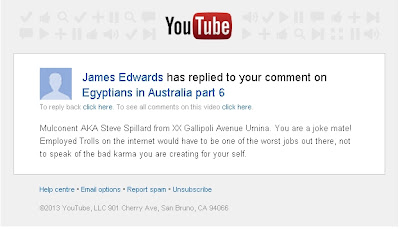 The other day I got called a troll , a first for me , a internet troll is usually someone who is annoying and persistantly upsets a discussion thread or community and is hard to get rid of , this comment appeared on one of Steven Strongs YouTube videos about his Kariong Egyptian UFO fantasy.
I like to leave smartarse comments on his and others similar themed videos for personal satisfaction and the vain hope of getting some decent discussion happening , but this rarely happens..
So recently I decided to change tactics and try to engage the fringies in an adult conversation but when faced with undeniable facts and pages of proof they would resort to the old psuedo sciences textbook of predictable replies like calling me some sort of government representative who is engaged to help " cover up " the Kariong story.
One idiot even went back as far as the 1800's and because I am white and he was supposedly Aboriginal held me responsible for ethnocide and genocide because he was unable to answer my simple questions or back up his own claims.
Now I get called a paid internet troll by some dickhead named James Edwards at YouTube which is just as funny as it gets , yes the guvmint pays me to cover up the real Kariong story ( I wish )
So the white knight James Edwards comes to the rescue of the crying babies at the Wake up World / Forgotten Origins discussion groups ( I assume this is where they all come from ) and tries to put the wind up me by posting my real name and address details in the comments section at YouTube.
I have never made my name a secret on my websites , sure I don't have it published anywhere handy but if you look around it wouldn't take you long to find it , I have privacy concerns so it's not going to be anywhere obvious.
What was slightly worrying was that this idiot also posted my old home address online as well , they must have outdated info as my brother now lives there and is quite a lot larger than myself so they should feel welcome to drop in , meanwhile you can find my address in the local Whitepages Sherlock....
Anyway since this Mr James Edwards decided to put some effort into cyber trolling I'd thought I'd look into him.
Firstly I don't think for a minute that this is his real name , the YouTube account he uses is little over a year old and has no uploads , comments or anything of interest to latch onto except for the addition of his favourites list in his profile.
It seems James Edwards likes to follow to video blog of a 15 year old girl in the USA - enough said ?
James Edwards also didn't know that publishing my details is an invasion of privacy at YouTube and it was deleted soon after I reported it.
If you want to play games think of me next time your CD drawer opens by itself..........
Posted by Steve at 5:48 AM No comments: Links to this post 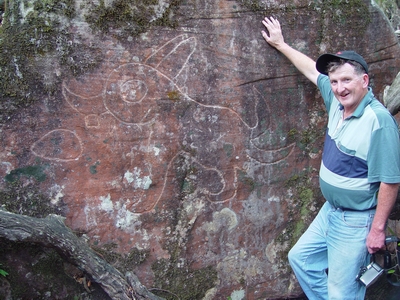 Seems like that new carving we found a couple of weeks back is old news , I received this photo recently showing the infamous Rex Gilroy standing next to it , Rex claims it is an Aboriginal carving of a bunyip.
The photo was taken in 2002 and looked aged then taking the age of this carving to around 15 yrs + , it is quite some distance from the Kariong glyphs located near a man made drainage culvert.
I'd say whoever was working on this drain may have spent some more time having some fun whilst handy with tools.
Who knows ........
Posted by Steve at 6:05 PM No comments: Links to this post

Karma works in strange ways , after moping about for a few weeks missing my old dog I decided to browse through the dogs online at my local pounds and rescue organisations.
So many poor little faces gazing up at the camera I was worried I'd come home with a van full of doggies , cost dictated that I could only afford one and after a couple of weeks looking I had narrowed my choice down to a couple of dogs.
One was a female staffy that some lady was giving away because she had just moved into a town house , the other a roman nosed bull terrier that was being sold cheap because his owner was moving interstate.
I decided to look at the rescue mobs website again late one night and found this little mutt named Boots.
The photo of him basically won me over and I drove up into the Hunter Valley to check him out on Easter saturday , he was a bit bigger than I thought from the photo but after a few minutes I could see he was a good dog. 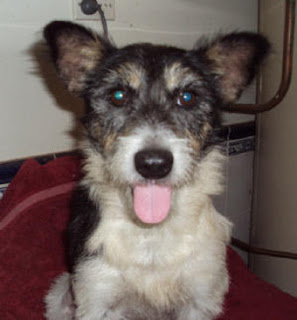 The rescue lady seemed to think he was the right type for my lifestyle so we loaded him into the van and set off home on a 2 week trial , poor little bugger slept on the back seat all the way home , I think he was glad to have some peace and quiet after being in a yard full of yapping dogs. 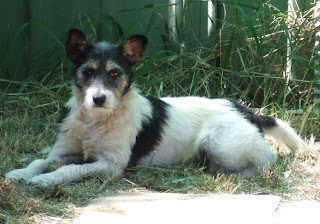 He's a funny mix of dogs , my guess is he's Border Collie x some sort of terrier , his body is all out of proportion with long gangly legs and a tiny head , but he is the most polite gentle soul.
He's not used to being an inside dog quite fully yet , the TV scares him and he barks at livestock noises in some shows , the computer and my mobile phone start up tunes scare him and he don't like the heater at all ( yet )
I think when the rescue lady rings me next week I'll be telling her that I'm going to keep him , life's too short. 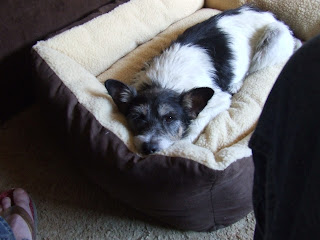 Posted by Steve at 5:51 PM No comments: Links to this post