Got an email earlier this week ...

I'm an archaeologist here in the US working on a one-volume encyclopedia
tentatively titled "Encyclopedia of Speculative Archaeology" which deals
with a host of archaeological fakery. I am including an entry on the
so-called Gosford Glyphs. I am writing to request permission to use one of
the photographs of the glyphs that appeared on your website
(http://home.iprimus.com.au/blazelands/woywoy/carvings.htm). (It's the image
at the bottom of the page, a close up of the glyphs).

Thanks for considering my request.

Sounds legit so I sent off a few photo's and shall await my free copy , cheers and my name is Steve mate.

A couple of pics I took last visit , many people have downloaded my map to the site and visited since I done the article on woy-woy.com , my directions take them the safe way in and not trampling through the National Park nearby.
The best preserved carvings , the other wall is more weathered 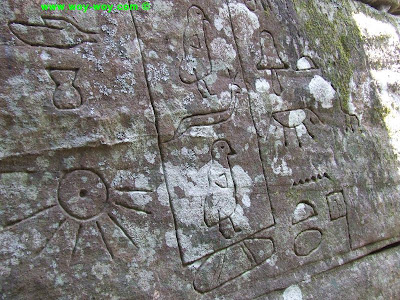 The dog headed Egyptian figure , a later addition from the 80's , badly done 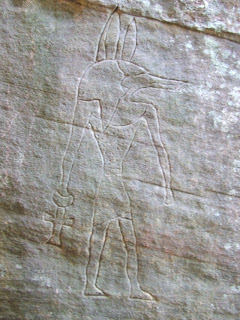 Been a while since I added a link to the local businesses page , but got an email from the mob at Happy Herbs who have a new store at Erina and Woy Woy - check out tha erbal mon !

Pope announces that Mary McKillop is to be cannonised this year ...

Tiger Woods says sorry to everyone who will believe him ...

Japs fail at using pepper spray on the Sea Shepherd crew and shoot themselves !

Meanwhile at home I finally found out what is making all that noise late at night in the kitchen , it seems that a large Eastern Water Skink has taken a liking to my dogs' food and is sneaking under the gap in my front door , pigging out and sleeping it off under the fridge , then doing the bolt back out the door at day break !

The latest update on the collection order , 120 issues and models are planned at this stage , as of last year due to request from CTC Forum members models from the Deagostini Panzer Collection are being merged into the CTC , the Panzer collection comprises of some 60 AFV's

The Brooklyn Battery was located in McKell Park , Brooklyn NSW , mainly an anti - aircraft battery , this battery was made to protect the Brookyln river area and the Hawkesbury River railway bridge , artillery was located across the bay at Little Wobby in purpose built fake houses and an anti submarine net was placed from the tunnel mouth to Dangar Island.

This week I located the Brooklyn Battery that I had read about a few times lately , I spotted what I thought was the gun emplacement from Google Earth. There is no map that shows it's position readily available so I thought I would just wing it down to Brooklyn on a day off and have a look myself.
As it didn't look like to much of a hike I decided to take my mutt Chewy with me , he likes an adventure too , as long as we don't go to far or into to much thick bush , once the little bastard has had enough he just parks and waits til I carry him out.

Chewy on our last mission , tail down / tongue out / one ear starting to droop = he's good for another half k then I'm gonna have to carry him !

So I headed to Brooklyn and the marina area in the centre of town , took a right hand turn up the steep road to the headland and into McKell Park.
In what was one of my most easiest treks , Chewy and I meandered across the park and took a trail down to the point , while keeping an eye out for any concrete formations in the bush I noticed there were many hobos and backpackers encamped in the overhanging sandstone cliffs along the headland , in fact every cave had a pair of legs hanging out of it - talk about hobo central geez !

I get to the lookout and feel a bit downhearted as this is the hexagonal shape I saw from Google Earth "Damn it's just a bloody lookout" I think to myself , then I have another look at the raised centre with a iron nub in the middle , I then notice that the concrete part of the lookout is a lot older than the rest , in fact it's the same style of formed concrete I've seen a lot ...
So I sit down on the seat provided and have a think , then I look down and see this ....

Bingo , just a small tad of info left there by someone who knew people like me would visit

... the anti aircraft battery , which consisted of Bofors AA guns on Mckell Park overlooking the river and one AA gun on each side of the first railway bridge. A 3 inch gun was placed on Flat Rock Point - Noel Johnson 1993

A few pics later and my mission is done , the gun positions on the old rail bridge are probably long gone as they built a new bridge in 1940 - 46 and it lies on railway property so entry verbotten !

A 3 inch gun that was used by Coastal Defense units in the USA , Australia had the same guns and the big clue is look at the base - it's hexagonal just like the concrete base of the lookout

A Bofors 40mm AA gun , you will probably find one of these in the gardens of your local RSL Club , every town had one or 2 during the war , there's one in the carpark at West Gosford RSL and I think the little club in Springwood Avenue still has one out the side , also theres a rather nice one at the front of The Entrance RSL Club kept undercover.

Looking downstream from the gun emplacement , the furthest point on the left is Juno Point , home of another gun battery and on my mission list !

Seen this old Navy landing barge moored at Brooklyn , looks like it's the local garbage scow now going by the dozen or so Otto bins on deck , thought I'd post this one for Spike , who likes a good boat pic and is strangely absent from the blogging scene lately .... hurry back Spike !
Posted by Steve at 9:04 PM 3 comments:

I'm working on a new Google Maps tour thingy titled The Coast at War - this will give you a tour of military sites along the coast between Sydney and Newcastle listing coastal fortifications , airfield and radar installations , sites of plane crashes / forced landings and shipping losses.
In compiling this information I have come across several fascinating stories like :

The laying of mines along the coast by German submarines which resulted in several ships being sunk.

The stalking of merchant vessels by a Japanese submarine over a period of 2 months , this vessel fired upon Newcastle and Sydney as well as sinking a number of ships

Secret landings on the coast by Japanese and German seamen during the war.

The last days of the 3rd mini sub that attacked Sydney Harbour , Fort Records from Brooklyn note the sub in the area in the week after the sinking of the Kuttabul , at one stage it was even stuck on the mud flats at Patonga before disapearing again , were the crew still alive ?

I will go into detail on each story as the year goes by , so much info to sort through yet , I must thanks the lads at Fishraider forums for helping with some fort locations , an inspired peice of detective work if I must say so myself lol
How would I find these hidden bunkers along the coast ? Who would know ? The National Parks mob don't divulge much info as they want these sites protected and the National Archives won't let go of info easily without me having to actually visit them and fork out some cash.
So after a bit of a brainwave I'm thinking the local fishos would know because they spend the time in the water looking at them quite often , so after a quick post on the forum I had the info I needed within 48 hours !

When it gets cooler me and the bro will be visiting some of these coastal forts and getting some pictures , it will involve a bit of bush bashing and detective work , should be fun.
First visit will be to Brooklyn where I think I have spotted the hexagonal foundations of a gun emplacement on Brooklyn Point , Brooklyn Battery is mentioned in a few old Fort Records books at the National Archive , apart from that there is no mention of it anywhere else.
Also planned is a run to the Sport and Rec camp at Brooklyn to visit the site of the Juno Point gun battery , this is just around the headland from Patonga , and after that we will head to West Head at Pittwater to locate the extensive fortifications that watched over Broken Bay

Tanks Traps at Stockton Beach NSW
During WW2 thousands of concrete tank traps were placed along the length of Stockton Beach near Newcastle to thwart any atempt by the enemy to land there , today many are still there hidden in the sand dunes and under the water causing hazards to local surfers and fishos.
Weird to see this sign on an Aussie beach in 2010 ....