Another 10 things in my junkbox


Staff panic button from Peat Island Hospital circa 1940's - I unbolted this off a wall in one of the wards while I was working there renovating the old institute for the mentally ill.
It's made of brass and can only be opened by a specially shaped key , inside there is a button used to alert staff that the 2 headed man had escaped yet again !

A woggle - a device used to hold a boy scouts scarf around his neck , you threaded the scarf down through the middle of it , it was made out of a vertebra bone from a goat that we ate at my very first Kiwi hangy , mum did the paint job , she was also a cub scout leader and the first lady Venturer leader in Australia

My old Hornby Victorian Rail electric train that my dad proudly bought for me back when I was around 10 , dad was a railway man like his dad.
Like all kids my age who kept there old toys we all checked to see if it was worth anything on Ebay as we got older , sadly a shit load of kids got this train set as well and it's only worth around $30 buck as parts to a collector , like I'd ever sell it.

A 1942 WW2 era signal lamp that was used on military vehicles in the Australian Army , one of the treasures my grandfather handed down to me

An old painting I picked up from the local markets dated 1922 , a good example of Egyptmania that was the fashion around this time , there was a great interest in all things Egyptian and it influenced the whole Art Deco scene.
It could also be the work of a returned Digger from WW1 who was stationed in the middle east , that's my gut feeling when I stare into it

A chromed bullet belt - I think its 7.62mm ammo commonly used by the military , I've had this since the old headbanger days and used to rock out with leather jacket , semen count reducing black jeans and studded arm gauntlets much to the dismay of mother and everyone in my redneck footy loving town.
Noteable moments were wrapping it around the head of a punk rocker in the middle of George Street , Sydney one night while my mate was getting the shit kicked out of him , I scattered the band of mohawked freaks and then spent the next 15 minutes on my hands and knees trying to find all my goddamn bullets which went everywhere .....

Post war trench art - this was made by my grandfather , it's made of solid steel and was cast in sand , this one had been used as a hood ornament on one of his cars , he also made nicer ones that were all polished up to a chrome finish and adorned large standing wooden ash trays that he also built , dunno where they went after he died.
A yes it is a Spitfire !

Paintball flag - our motley crew of mismatched camo wearing warriors had had our asses kicked in every game that day , our heroic captain decided he had lost enough dignity and decided to call it quits and left the team on the last game of the day.
The task was handed to me to lift the spirits of our demoralised team and I formulated a plan , hopelessly out gunned all day by teams sporting semi-automatic paintguns against our pump action yet very accurate paintguns I decided to give up the teams only semi-auto and handed it to the most crazy guy on our team , I formulated a plan to quickly flank the other team into a corner in the very first seconds of the game.
I ordered the bulk of the team to back up the crazy guy with the semi-auto and run like the wind to a bunker in the far corner of the field in the first minute of play , myself and a few others would lay and snipe across the small valley as they tried to counter attack our move.
The whistle blew and they were off , 8 guys sprinting like hell to the first bunker and the crazy guy out front blazing away on the semi auto like Rambo , 7 guys behind him in single file.
Across the valley I was delighted to see that we could see most of the other team and they were side on to us and did not know we were there hidden in the grass , we began sniping.
The guys had reached the bunker and were still advancing engaging the bulk of the other team , we were picking them off from across the valley as our good ol pump action sniper guns had the distance on the flashy semi-autos.
Then I made the charge with the rest of squad , we stormed across 2 suspension bridges in the middle of the field and entered the enemy base , there was no one left ..
I grabbed the flag , we won !
That night were wore our team t shirts with pride and ordered a stretch limo to take us to Jupiters Casino for a nights partying , the Woy Woy boys are in town !
The only face not smiling was that of the captain .....fuckwit.

Old bottles - I used to have some real nice ones but sold them in a garage sale ( stoopid ! ) , anyway these ones I've found since are left to right:
A 100 year old milk bottle from an old dairy at Wollombi , found that while were were painting an old sandstone residence on the dairy site.
A Spruso Hair Tonic bottle circe 1920's , found while digging around on the old Woy Woy waterfront
Old medicinal bottles found on a dug up housing block in Ettalong

Every watch I've ever owned bar one - Mum bought me the first one on the left , I remember going on the train with her down to Hornsby to buy it from a shop there when I was as about 12.
The second one is a flashy LCD one from the 80's , it was red and black and way nerdy , but not as nerdy as my LED watch which I lost , it was one of those spacey black plastic ones with the red LED display that came out in the 70's ,worth a bit now on Ebay :|
The last one was bought by one of my many ex's , it outlasted her .
Ain't worn a watch since.

Found this on Google Street view , had a bit of a chuckle ....

WTF can't I have a crap in peace !

Just dropped in for a cuppa 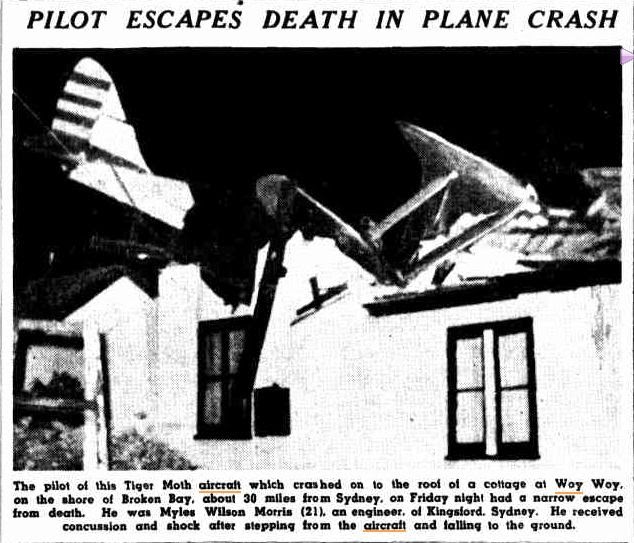 While researching about the RAAF airfield at Woy Woy a few years ago I found reference to an aircraft crash that occurred at Umina in 1950 , the details were scant on the report and it wasn't until a couple of years later while I was interviewing an old local who used to deliver the mail on horseback that I found out about what really happened.
I found a couple of newspaper articles about the story just recently at Trove , an online resource of old Australian newspapers which is being added to gradually as they digitalise more and more publications from around Australia
A pilot on his way home to Bankstown was hit by heavy weather off Terrigal and he decided to make an emergency landing on the old wartime airstrip at Woy Woy , as he began to land he was hit by a strong crosswind and he crashed into the roof of a house in Nelson St Umina.
Luckily no one was home at the time as the plane tore into the roof of the fibro house , the pilot survived the crash but in a dazed state stepped out of the cockpit of his plane and fell off the roof injuring himself badly.
In one newspaper article it says " had the owner been home at the time he could have passed a cup of tea to the pilot " as the plane came right through the roof into the living room.
And funnily enough at the same time a delegation had arrived from Gosford by train to petition the local council to keep the airfield in operation , one assumes it was refused after this day !
The runway was also used by the Woy Woy Riding Club and was eventually built over as housing blocks were sold along Trafalgar Avenue.
The runway was originally built by the Australian Army for the RAAF in 1942 as part of a coastal network of airfields , designed to house 8 medium bombers as a satellite base of the Schofields Naval Air Fleet at Quakers Hill , Sydney.
It is thought that 4 bomber pens were built around the McMasters road end of the strip in the adjoining streets which were to be used as taxi ways to access the main runway , a clever piece of camouflage !
As the threat of invasion diminished due to the war in the Pacific , the airstrip was delegated to become an ELG - Emergency Landing Strip and no aircraft were based there full time.
The Army sold off and returned all land to former owners in 1946 , much of it was bought up by developers for cheap housing blocks.
It ran adjacent to what is now Trafalgar Avenue from McMasters road in the north down to Albion Avenue in the south , the small park opposite Umina Fire Station at Blackwall is all the remains of the actual runway surface and small glimpes of red gravel here and there are the tell tale signs , hence it's old nickname " The Red Runway "

News article at Trove here
Posted by Steve at 1:39 AM No comments: