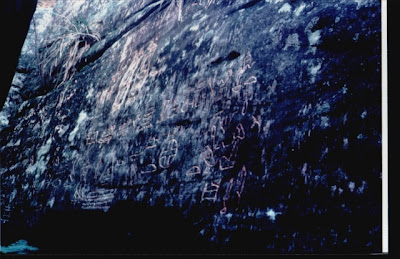 Some more information about the Gosford Glyphs has become available since my last post , after observing my discussions at Save the Sacred Land at Kariong , a concerned citizen sent me a zip file containing some interesting photos.
These are copies of the original photos taken by the NPWS in 1983 when they conducted a full scientific evaluation of the site.
From the photos you can see the entire east wall has been recently cut and more importantly you can see that the ears on the Anubis glyph are not quite finished , some time afterwards the artist returned to finish up. 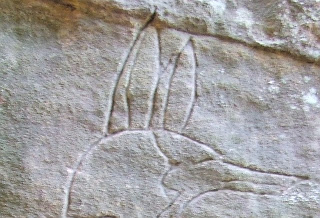 Anubis 2007 - note ears now finished , this is a detail only the original artist would have returned to do

The freshly cut glyphs show spalling chips around the outline of each figure , this is unavoidable when carving sandstone unless you have proper tools and running water.
I now have a timeline of pics of this Anubis fella from 1983 to 2010 and there is no evidence of it being entirely re carved since then.
Another part of the myth is the several set of stairs carved into the rock around the site , a quick email to the boffins at Elvina confirmed that these stairs were carved by E.F Gilford back in the 1930's. 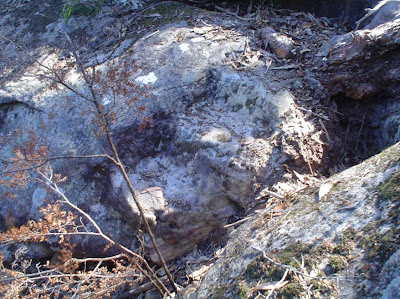 As mentioned in my earlier post , Mr Gilford was quite in awe of the local Aboriginal carving around his property and carved the stairs for the many visitors he took on tours around the bush from his farm near the site.