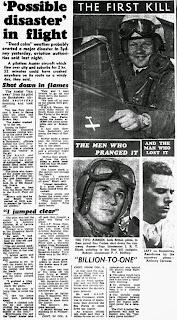 In the early 80's an aircraft engine washed up on the beach at Umina , It was reported in the local paper at the time and the motor was dumped at Woy Woy Tip.
I decided to do some research at ADF Serials and see if I could find a list of aircraft crashes in that area and stumbled across this most amazing story.........
It was Tuesday the 5th of August 1955 and Anthony Thrower had just landed his Auster J/4 Archer at Bankstown airport when his motor stalled at the end of the runway , he decided to hop out and manually start the engine by hand turning the blade ( a push start for a plane ) . the engine kicked into life and the plane moved off with a bump - trouble was Tony was not in the cockpit but running alongside trying to grab a wing strut !
Much to his horror the plane gathered speed and started down the runway and took off , it circled the field in tight banks and at one stage the control tower was evacuated as the plane swooped close by before heading off into the sky towards the coast........
At 9.30 am a call was sent out to the R.A.A.F to assist in bringing the aircraft back to earth as it was now headed towards Sydney , a Wirraway trainer was sent up to shoot the plane down once it had reached the ocean and it was found about 5 miles off the coast at 9000 feet , the pilots hands were so cold in the Wirraway that he was unable to operate its guns so it turned back
In what was now becoming something from a Monty Python movie a second aircraft was deployed - a Meteor jet fighter was sent to shoot it down but it's guns jammed.
At 10.15 a.m 2 Sea Furies on loan from the Royal Navy were sent out to bring down the rogue aircraft , guided by the radar installation at South Head they intercepted the plane at 10.000 feet about 7 miles east of Broken Bay and it was shot down into the sea.
The Civil Aviation Authority later described the incident as a billion to one happening !
Posted by Steve at 1:38 AM