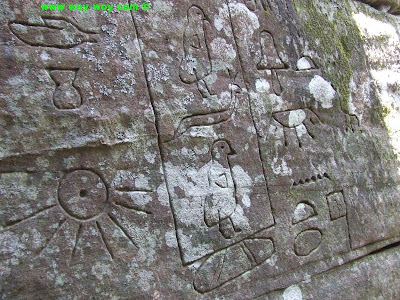 Once again we are drawn back to the mysterious Gosford / Kariong / Woy Woy / Egyptian Hieroglyphs , due to new research being undertaken by retired geologist and fellow Elf John Byrnes I chanced upon a lead and was able to contact the first person documented to find the glyphs - Alan Dash
Alan worked as a surveyor for Gosford Council for many years and I spoke to him recently , here for the first time we have an account from someone who witnessed the creation of the glyphs site over a couple of years in the 1970's. 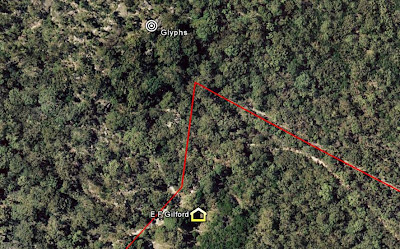 Alan first found the glyphs around 1975 ( he is unsure of exactly what year
but said " early 70's " ) , at the time he was surveying the water easement
for Gosford Council and had to make a line to Lyre Trig.
While working he noticed a chap emerge from a hole in the rock wall and walk
over to the old Gilford house , this old home long abandoned had become the
home of "derelicts" Alan said.
The Gilford home was built in the 1920's and was the home of EF Gilford.
Thinking that he may have been growing pot and curious , Alan went to have a
look in the hole and found the carvings on the western wall in the cleft , the
east wall was bare at this time.
Six months later he took a co worker into the cleft and found that the eastern
wall was now completely covered in carvings as well.
About a year late he brang a group to the site and found a second lot of
glyphs had been added some 50 metres from the cleft along the rock wall ,
these are much smaller and " rougher " Alan describes.
In 1979 the Gilford house was destroyed in the bush fires.

Alan was quite accurate with his descriptions of the sequence of carvings appearing at the site , this was important to my research and puts an end to any thought that these were created pre 1900's

Alan Dash now works as a guide for the NPWS